The forest industry is evolving. Once rooted in traditional thinking and careers, the industry is moving into tomorrow and everything is on the table! To remain competitive, the industry is exploring new technology as well as existing technology that can be applied in a new way to the forest industry. Forestry is also establishing new ways of functioning—operationally and non-operationally—that will change how things are done to create efficiency, maximize margins and operate sustainably.

At Tolko, our eye is clearly on the future when it comes to creating a workplace where interesting careers, growth, and opportunity are available to those who want to take full advantage of everything the forest industry has to offer.

To better understand how you can build the career of your dreams with us, we recently spoke to three employees who’ve taken an interesting career path with Tolko. Today we’ll introduce you to Rhys Thompson, whose career has taken him from the banks to the rails. 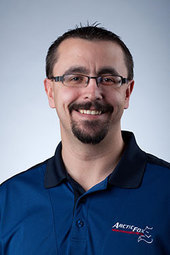 Rhys Thompson has been in his current position as Rail Logistics Manager for almost a year. It’s a role he enjoys as it allows him to support his staff through the many complicated scenarios that arise when one is trying to get vast amounts of product to customers around the world. In his current capacity, Rhys serves internally as the liaison between Operations and Sales, and externally as the liaison between rail carriers (i.e. CN) and Tolko operations.

Rhys knows that he has a great team and he only steps in when situations need to be escalated to be resolved.

“Problem-solving. That’s one of the teams’ main strengths, so they really make my job easy. I touch base with them every day, and with other people we work closely with, to make sure things are running smoothly.”

So how did Rhys end up here? He began his career with the company on July 31, 2006, as Senior Credit Specialist, a role he served until November 2008 before moving into the role of Treasury & Risk Supervisor. From there he worked as a General Accountant (July 2013 to February 2015), a period during which he notably achieved his CPA designation. Then it was on to Team Lead, Lumber Customer Service, from February 2015 to October 2015, and, finally, his current role.

It’s been a twisty road for Rhys but he’s loved every moment. “I have enjoyed the opportunity to have a diverse career progression,” he says. “At Tolko, I have never been ‘pigeon-holed,’ and have had the chance to work in a number of different groups. One of the best things is I have been able to control is my own destiny. It’s fairly common in the company. If you want something and you take the initiative, you can get there. “

When we asked Rhys what’s been his favourite role in the company thus far, he says: “Tough question… each role has had its ‘pluses.’ I am enjoying my current role as I feel that I have been more engaged in our business. In my other risk management-related roles, I was more peripheral—dealing with banks, insurance providers, etc. In this role, I am involved daily with Sales and Operations and that’s always interesting and exciting. Every day is a new adventure.”

And Rhys isn’t done yet. He has his eyes on his next role and knowing Rhys, he’ll get there yet!

Stayed tuned for our next interesting career featuring Sari Cox, a Maintenance Planer Supervisor at our Heffley Creek division.