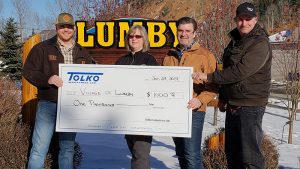 The Village of Lumby, BC has launched a local beautification project, and Tolko’s recent donation will go towards cleaning up Lumby’s Cedar Ridge Park and provide funds for a new landscaping project.

Darren Reade, Maintenance Supervisor at Tolko’s White Valley Division says, “When we learned about this project we thought it would be a great idea to team up with our Okanagan Woodlands team to support the Village of Lumby’s efforts.”

“On behalf of the Village of Lumby, I want to thank Tolko’s Okanagan Woodlands and White Valley Divisions for their donation”, says Roger Huston, Manager of Operations with the Village of Lumby. He adds, “With many exciting projects planned this year within the White Valley area, the partnership and a generous donation from Tolko will directly enhance the landscape design being developed for Cedar Ridge Park.”

Work on the landscaping project proposed for Cedar Ridge Park is planned for the 2019 season.