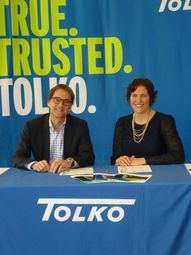 Vernon, British Columbia – If you want to create change, sometimes you have to look at where you are and find a new path forward. Today, that’s just what Brad Thorlakson, President and CEO of Tolko Industries Ltd., was doing as he added his name to the Minerva Diversity Pledge, steering the company toward a more inclusive and diverse future.

The Minerva Foundation is a BC charitable organization that supports women and girls to gain the confidence and skills they need to reach their leadership potential. From leadership programs to education awards and programming developed in partnership with Indigenous women, Minerva elevates the visibility, influence, and contribution of women to play a greater role in leadership in BC.

“We are committed to building a more diverse and inclusive workplace at Tolko,” said Thorlakson. “Supporting the Minerva Foundation and signing the Diversity Pledge is another step in this commitment. Embracing the principles of this pledge will help our business thrive and our communities to grow stronger.”

Brad says signing the Minerva Diversity Pledge is important on a business and a personal level. “From a business perspective, a diverse and inclusive workplace makes companies stronger; from a personal perspective, as the father of two strong and capable young women, it makes me proud to know Tolko is taking steps to build a better future for all.”

Thorlakson credited Vice President, People & Services, Tanya Wick for her drive and determination to bring diversity to the forefront at Tolko and in the industry. “Tanya is passionate about providing opportunities for women to succeed and become a bigger part of the forest industry. She has been a worthy champion for the cause and I have no doubt we are here today due, in large part, to her efforts.”

Tina Strehlke of the Minerva Foundation talked about the importance of Brad’s signature. “Research shows that buy-in from top leaders is critical to advancing women in the workplace. CEOs who make gender diversity part of their strategic agenda are more likely to reap the benefits of diversity including increased profits, employee engagement, and innovation.”

The Diversity Pledge has seven principles and was first signed in 2015. Current signatories include the CEOs of Canfor, Best Buy Canada, BC Lotteries, and the Jim Pattison Group.